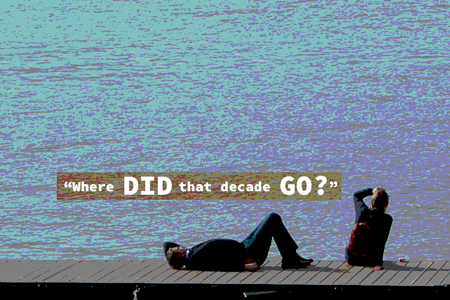 The 2010s have wrapped up, having laid down tectonic markers for where we are as a society. Things that were new in 2010 have become commonplace in 2020. Naturally there are even those who are already envisioning “what’s next?” in technology.

Generations have come of age while forebears prepare to cede their dominance, albeit reluctantly. The tenor of political discourse has struck new (low) notes. The economic landscape has shifted, while the ethnographic landscape is evolving. Assumptions about what should be legal and who can marry have been successfully challenged. The past decade continues to teach us that the only constant is change. What often varies, is the pace.

So What Has Changed?

Pew Research Center has gathered data and conducted surveys to illustrate and quantify a number of the most widely felt statistical trends from the past ten years. Other data sources are cited as well.

Online Usage – Online usage became in the 2010s what TV became in the 1960s. Over 90% of U.S. adults go online, including nearly 100% of Millennials. The overall usage figure was 76% in 2010. While the curve flattened in the past decade, saturation is approaching. Of note, about 20% of Americans rely exclusively on smartphones for internet use.

Smartphone Growth – Smartphone ownership grew dramatically during the past decade. In 2019 more than 81% of Americans owned a smartphone, up from 35% in 2011. That figure jumps to 93% for Millennials.

Social Media As Prime News Source – Social media sites have exceeded print newspapers as a source of news. In the era of declining print news circulation, Facebook is the overwhelming leader in this phenomenon, with 52% of U.S. adults getting their news from that source. At the same time, this is occurring against a backdrop of growing mistrust of these platforms as reliable stewards of personal data and reporters of current events.

Millennials In The Workforce – U.S. Millennials initially became the most numerous generational cohort in 2016. They will reach 50% of the total in 2020 and are expected to represent 75% by 2025. By 2018, Millennials in the U.S. workforce (57 million) were more numerous than Gen Xers (53 million), and Baby Boomers (steadily receding at 38 million).

Average Household Size Increases – The 2010s were the first decade in 160 years to exhibit an increase in household size. The main cause is the rise in multigenerational households. The reasons for this are both economic and cultural. Young adults without a college degree are more likely to be living with parents. Even with a degree, the overhang of college debt and workplace volatility brought on by the gig economy have made domestic independence more elusive. It is also more common for immigrant families, especially Asian and Hispanic, to house multiple generations under the same roof. For more on household characteristics visit the U.S. Census Bureau’s American Community Survey.

Longevity Equality – The age at which men continue to represent an equal share of the total U.S. population as do women is increasing. Men are now attaining a greater age before the traditional longevity advantage enjoyed by women begins. In 2010, the crossover age was 39. By 2018 that had increased to 44. Here’s an interactive chart from the Census bureau. The reasons go beyond biological gender differences. Women worldwide continue to enjoy greater longevity, but U.S. men are keeping pace as a share of American population longer. Factors may include medical advances, better work/life balance, diet, and exercise.

The U.S. Population Continues To Evolve Ethnically & Racially – As of 2015, the U.S. Census Bureau estimated that 50.2% of babies under the age of one year in the U.S. were non-white. Beginning in 2014, racial and ethnic minorities represented a majority of K-12 public school students. The figure for fall 2019 stands at 52.9%. For a deeper look into these and other figures regarding education trends in the U.S. download Projections of Education Statistics to 2027.

Religious Participation Declining – Church attendance among Americans is down in the past decade, at least in terms of frequency. While 45% (down from 53%) report attending church services once or more each month, 54% (up from 46%) report doing so just a few times a year. Overall, the share who describe themselves as Christians is down to 65% (from 76%), while those reporting no affiliation stands at 26% (up from 17%).

Legalization Of Marijuana – In 2010 41% of Americans favored the legalization of marijuana. That number has reached over 67%. 91% of Americans say marijuana should be legal both for medical or recreational use. To date, 33 states have legalized marijuana for medical use, while 11 plus the District of Columbia have legalized it for use recreationally. The growing acceptance of marijuana, and by association cannabidiol (CBD) has resulted in its own industry NAICS Code: 325411- Medicinal and Botanical Manufacturing. Plus, in a National Restaurant Association survey, 77% of respondents named cannabis/CBD-infused drinks as the #1 trend, while 76% cited cannabis/CBD-infused food as their #2.

Same Sex Marriage – For decades, attitudes concerning same sex marriage have been in flux. By 2010, support for and against same sex marriage was about equal. By the end of the decade, support reached 61%. The political landscape continues to reveal deep divides over the question, with 75% of Democrat/Democrat leaning respondents approving, while only 44% of Republican/Republican leaning respondents approve. Support is highest among Millennials and religiously unaffiliated, though majorities are in favor among Gen Xers and Boomers, as well as Catholics and white mainline Protestants. Support is lower among Hispanics and blacks than among whites, though majorities of each are in favor.

These snippets do more than chronicle trends that occurred in the 2010s. They represent opportunities. Marketers must recognize the current realities. People are who they are and do what they do. People fall in love, marry, and establish households. They raise families. Children go to school. People embrace technologies and use them for work, information, and entertainment. People worship (or do not) how and when they please. People grow up and grow old. They want all these things to go as well as possible.

As marketers it is essential to understand how the world has changed and how audiences have changed along with it. It is then a marketer’s responsibility to serve their needs with the right products and services in the right place at the right time. Success is driven by data that supports this effort, data that is properly gathered and accurate. Success is driven by offers that matter to the audience, that are timely and beneficial. Marketers must constantly be tuned in to their audience, not just in years ending with zero.