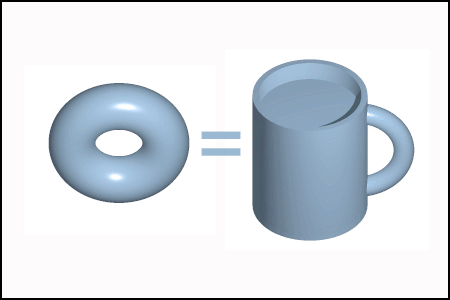 Let’s take a new look at look alike targeting. In the field of topology, there’s an example which insists that a donut and a coffee mug are identical. (Each is a toroid with a hole in it.) The fact that one can hold liquid while the other can be eaten is immaterial; they share common key attributes. While they may not look alike, they are alike. Watch this animation to get the idea.

Which brings us to building a direct mailing list based on SIC codes. (Segue!) Coffee mugs may be found at SIC 3263: Fine Earthenware (Whiteware) Table and Kitchen Articles while donuts would be listed at SIC 2051: Bread and Other Bakery Products, Except Cookies and Crackers. Despite their separate spots in the pantheon of SIC codes, it’s interesting how Dunkin’ Donuts trades on them being inseparable. Every day over three million people agree.

So seemingly unrelated things may share characteristics which make them useful in entirely new and different ways, on their own or in combination. For marketers, that raises the possibility of expanding their audience. Who wouldn’t jump at that?

Sometimes it’s topology, sometimes synergy. It’s instructive when related to audience targeting, particularly when choosing mailing list data. Direct marketers may self-limit their targeting possibilities based on how their product or service has been embraced so far, and by whom. Instead they could dig below the surface to discover the essence of what it could mean to a whole new audience.

Think of the first “Dummies” book. If it ended with the first title, “DOS for Dummies”, the franchise would never have taken off. But the creators soon realized the traction to be found among beginners eager to learn almost anything. So here we are, hundreds of “Dummies” titles later. The sweet spot was recognized and implemented, thus the market was expanded with no end in sight. The target for “Dummies” books began with DOS wannabes and has expanded to include practically everyone.

Then there’s the smartphone. They have been embraced by those who want a personal computer in their pocket. Plus a web browser. And messaging. A health monitor during exercise. A sound system that can store an almost infinite amount of music. A similarly expansive library of books and periodicals. A game console. A really good camera (with the ability to edit and store all their photos.) A wayfinding tool that can navigate from any point A to any point B. A flashlight. Even a phone.

Manufacturers and marketers of all those features as standalones have by and large struggled to remain relevant as niche products.

The most successful players in the smartphone arena serve needs far beyond simple voice communication, by offering the widest range of possible uses that appeal to a vast cross section of the public. The device is primarily what people make it.

So, it’s crucial to think outside the current box. Understand that a product or service is more than what it is being offered in and of itself today. Growth means more than finding look-alike customers. Rather it is identifying how countless new users may find value in what it does for them. Resources such as SIC codes are a rich source of data, but also a trove of potential ideas. The means to target fresh are-alike audiences is right there in the data. Choose wisely.