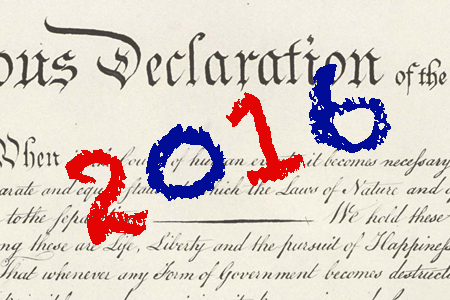 Throughout the current election process, they have spoken. Loud. And clear. They have participated in the primaries of both major parties in droves. Now that the candidates are set, they will be the ones who determine which one becomes the next President of the United States.

While most are registered with one party or the other, many would nonetheless characterize themselves as “undecided”. Traditionally the undecided vote has been crucial to victory. But in 2016, a more accurate description might be “none of the above”.

Each candidate suffers a record level of disapproval within their own party. Frustration with government and the political process is spiking. In an atmosphere of such disaffection, neither campaign can afford to depend on “Never Trump” or “Never Hillary” winning the day. Neither can ever say “Never”, since one iota of complacency can sink either ship.

So in order to win the White House, the campaigns must find ways to reach out to this passionate voting bloc and persuade them that their candidate deserves support.

Complicating matters is that the platform each political party creates is comprised of “planks”. These are the segmented issues which in sum are what each party is supposed to stand for. The challenge lies in the fact that most voters are single-issue driven. Whether it’s the economy, national security, religion, race, whatever, each party has to reach beyond the base to convince the “none of the above” crowd that they have something for them. Every conceivable media touchpoint will be used to do that. (I)ncluding direct mail.

Political direct mail is a way to make a forceful argument on a single issue that resonates. But only if it is received by voters for whom that issue is key. That’s where the mailing list can be a deal maker or deal-breaker.

Take business owners, who are a potential portal to their colleagues and employees:

Then there are consumers, the gatekeepers to every household:

Of course, there are response lists of subscribers to publications and survey responders who are fine-focused on subjects and issues. A good data broker knows who they are.

As Bernie Sanders, (I), said in his remarks on the opening night of the Democratic National Convention, “This election is not about, and has never been about, Hillary Clinton, or Donald Trump, or Bernie Sanders or any of the other candidates who sought the presidency.”

He could go on to say that there may be an (I) in “we” after all. They are the (I)ndependent (I)nfluencers who each campaign must reach and persuade in order to prevail. Let the (I)s have it. As always, they will anyway.

Share
← Prev: The Postal Service Vision For The Future Of Direct Mail Next: THE NET-NET ON NET NAMES →